For any real life application of any tool you have to start with real life problem or a goal you want to achieve. In this case, the goal is to generate Jenkins build projects for all Git branches of your project. Remote repository in this example is Bitbucket, which makes things a bit more different compared to dealing with GitHub.

You have probably ended up here by following the link from this article. To reiterate, there are couple of Jenkins plugins that come close to solving the original problem, but they have number of serious drawbacks. So let’s see how you can solve this problem with help of Jenkins Job DSL.

The first 3 lines are hitting GitHub API and grab the list of all branches. This code is not going to work for Bitbucket, so we need to come up with something different. Another complication is that (in my case) we are dealing with private Bitbucket repository, so need to take authorization into account. So lets figure out what’s the URL to hit. The components of URL are

Time to put it all together

This code, when put together, will return list of all branches in JSON format, or will not in case you are behind the…

Yep, ";"s are a legacy thing and I put them there to demonstrate relation between Java and Groovy. In general, any Java code is a valid Groovy code, but not the other way around.

The JSON returned by Bitbucket API is a dictionary. Each entry has branch name as a key and branch description as value. Branch description is yet another dictionary with entries such as author, last commit hash and message, timestamp for last update, etc. Here’s an example.

To experiment with Bitbucket API directly you can use this REST Browser.

Using this information you can filter out unwanted branches. The reason to do that is that not all developers do a proper cleanup after their branches are merged. You can end up with branches as old as 3 years or more, which you don’t want to pick up and create CI build project for. So you can use timestamp information to ignore branches, which haven’t been updated for a long time. This is also an opportunity to enforce correct branch naming rules and filter all branches with incorrect names.

An answer an absolutely valid question of “Why the branches are not deleted automatically on merge?” That’s because some versions of git-flow do not use Bitbucket’s native merge feature, but use a rebase instead. Thus the branches are left hanging around after they are merged and it becomes developer’s responsibility to delete the branch.

Let’s go through the code in case comments are not descriptive enough. The main part is iterating over JSON dictionary branchesJson returned by Bitbucket API. On each iteration we have branch name branchName and its details packed as details JSON dictionary. We get the last modified date timestamp and convert it into the Date object. Now we can check if the branch has valid name and is not too old.

Another filter is for branches that are too old, or in other words branches that haven’t been updated for too long. This is what isUpToDateBranch method is for. Note that we consider all major branches to be always up to date. For example, master branch can be updated only when major releases occur and we don’t want its build project to be removed in the meantime. If Jenkins project is removed and then created again, its build number will be reset to 1, this is something we want to avoid, especially if build number is baked into the app version. Anyway, the logic is straightforward, if branch is one of the major branches, then consider it to be up to date. Otherwise, compare branch last modified date with current date and if the difference is more that expected (15 days in this example), then ignore this branch.

Then there’s a note, that no def keyword or type are used to declare majorBranches, validBranchPrefixes and allValidPrefixes variables. This is intentional. Omission of def makes these variables a so called binding variables. This is due to the fact that you are working with a Groovy script here and you have to declare variables like this to make them available for methods, e.g. to refer to them inside isValidBranch and isUpToDateBranch. I know it doesn’t sound like a solid explanation, but you have to take into account the fact that I myself should be considered as Groovy beginner, so this is the best I can come up with at the moment.

Final bit that needs some explanation, is the use of job construction. job is a property of the Groovy script you are running. In fact, the scrip itself is an instance of DslFactory class. Job is configured with a closure. The bare minimum it needs to create Jenkins Job (or as I refer to it in this article Project), is name, so I set it to current branch name replacing all "/"s with "-"s in the process.

As a summary for this post, you can try to run Job DSL script on real Jenkins. First or all, you need to have an access to Jenkins server. Next, you have to have Jenkins Job DSL Plugin installed. Another required plugin is Git Plugin.

OK, so I assume you’re looking at Jenkins dashboard right now. Go ahead and create New Item. Choose a name for your project and select Freestyle project type and click “OK”.

On new project configuration page you can leave everything “as is” for this example, the only thing you need to do is to add a new build step of “Process Job DSLs” type. 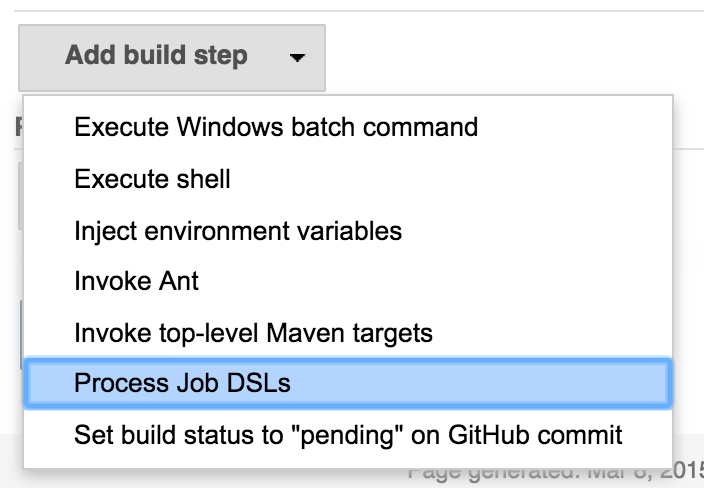 Now you can grab this DSL script gist and copy-paste it in Jenkins. Don’t forget to select “Use the provided DSL script” option first.

You should have noticed that DSL script you just copied doesn’t have the authentication and proxy bit enabled by default. I decided to make those steps optional so that you could run it in any environment. Since it points to a public repository, no authentication is required. Feel free to modify it to point to your private or public repo and to use your proxy.

OK, run it now and you should see something like this. 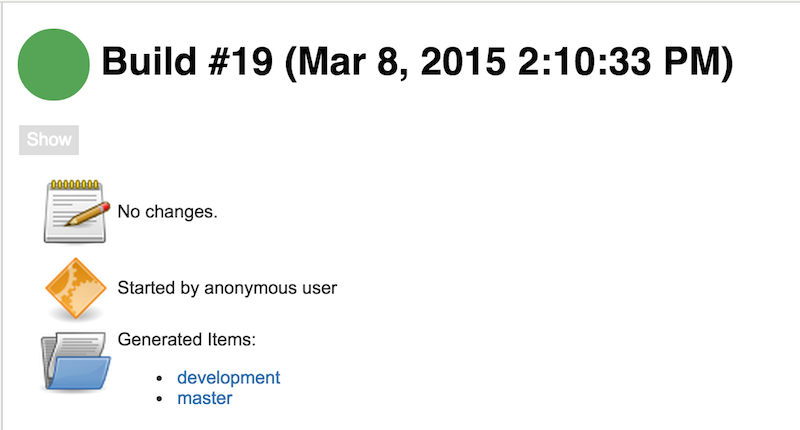 Here you have 2 Jenkins jobs generated for master and development branches.

This is just the beginning, from this moment on you can have numerous improvements. For example